The Thorn In My Side 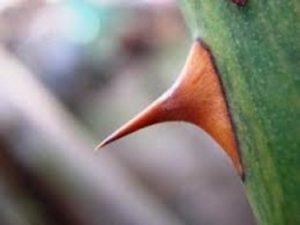 Depression can be devastating and even fatal. I have struggled with depression for as long as I can remember, and I know of what I speak.  I’m choosing to convey a positive snapshot inside the devastation of this mental illness that thousands of people suffer with daily. I never would have thought that I could have gleaned anything positive from my illness; but I have begun to see my struggles in a new light. I truly believe and embrace that thorn in my side, my depression, has kept me alive.

All the anger, self-hate, violence and turmoil it caused was necessary to keep me grounded. I was so prideful and vain that I blamed God for putting a curse on me. I constantly asked Him, “why me?” I hated the world and most of the people in it. It grew to the point I was literally at war with the world and with myself. I was a “Rebel Without a Cause.” All I wanted to do was fight something, someone, anyone because the only time I felt alive was in the eye of a hurricane. I was on a dark and lonely road. Anyone who has been there will be able to relate to what it feels like.

For me, reading the Bible began to change something inside of me. As I read of the trials and tribulations of Apostle Paul, I began to experience immense joy and horrible sorrow at the same time just like he did. I could not understand how this was possible. however, Apostle Paul’s asked God three times to remove the thorn in his side, only to have God say, that His grace was enough and the thorn remained. I have read Paul’s epistles over and over and each time, I receive new knowledge of what God meant.

When I began blogging and removed the mask I wore daily, it was one of the hardest things I ever did. I had hidden my suffering so well for most of my life and to expose it now publicly was so scary.  However, as I swore to myself and God, if I ever found an answer to my question, “why me”, I would tell the world every chance I got. The depression protected me from my worst enemy, me. It humbled me. It kept me looking to God rather than myself or others. It kept me fighting to overcome it rather than fighting because of it. It’s the thorn that holds everything together.

So, I am keeping my promise in the best way I know how, by sharing my journey with you. I have up days and I have down days. But the difference is now, I have let go of all that anger and hate that was tearing me into little pieces daily. This is not intended to be a Bible thumping story because I am still like a child learning to walk, and often it is step or fall at a time. May God bless yours or the struggle of a loved one from someone who understands. Enjoy my poem that illustrates the road trip of depression:

In my life, I’ve traveled many a dark lonely road

I have been to places where dark images abode.

I have seen dark times, laughed and cried

You’ve hardened my heart and filled me with pride.

For a short season, it appeared to be true

I wasted so many years in fear of you.

Should I ever meet you on this road my friend

I will warn you what awaits you around the final bend.

There is a road known as the Lost Man’s Curve

Though you will try it, you will only swerve.

For then, it is far too late to ever go back

To the place where you finally run out the track.

No more days in the happy bright sun

No more highs where your mind can run.

Nothing now will ever be the same

I warn you that this is no child’s game.

For you never had a chance to win

It takes you back to where you’ve always been.

There are only two roads in life you can take

And this is the one choice only you can make.

No stop lights to warn of the upcoming toll

Only the black raven that will take your soul.

Despite suffering in silence from chronic depression and bipolar disorder, I have managed to live a productive life. I graduated from Marshall U. with a B.A. and became a Social Worker. My fight as a social worker is to bring the effects of depression on our society into the social discussion. My experiences with persons in need of help to develop a safe home environment for their children as ordered by the court gave me a clear insight to how mental illness affected these families.

20 responses to “The Thorn In My Side”