Pain Has No Boundaries by Susan Day 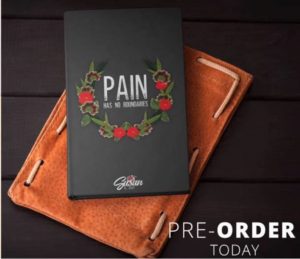 I don’t have a lot of memories of that of which I am grateful for however when I was 12 I was raped by the neighbor’s son he was in his 20’s or 30’s and I was 12. He came to the front yard near the front door of my parent’s house and told me that he would show me what it meant to be an adult. The secret I had always wanted to know.  My safety mechanism is that my brain shuts off and I pass out, which is exactly what I did but I remember waking up screaming in pain.

And that’s when I felt the most pain I had ever felt before in my life.

From my head, all the way to my toes my body stiffened and the pain touched every part of me for this man had hit me in the head with a rock because of my screaming. My body stiffened just like on the old cartoons when the cartoon character got smacked in the head and then I passed out.

As I open my eyes I could see the panic in his eyes I’ll never forget it, he thought he had killed me. He walked me back to the house and I ask him what do I do now, he told me to just act normal and pretend nothing happened, and don’t tell anybody anything, and that’s what I did. Result of the head injury that I had I have had seizures since that summer to this day. I have a lot of trouble with my memory. I have PTSD as well. No one in my family knew for at least a year that this it happened to me.

When I was in my 40s I saw this man in the grocery store and told the lady at the register that that’s the man who raped me when I was 12 and he overheard me. He left with his wife and then came back without her he asked me if I would go to therapy with them because his wife thinks that I need to go so we can find out why I would ever think that he raped me. I said hell no and get away from me I’m not 12 anymore. He left in a couple of years later my mom handed me a newspaper with his obituary that said he had drunk himself to death.

For the first time in my life I felt the freedom I have never felt before and I do feel guilty for feeling that freedom.

I am a mother of two, and I have one granddaughter. My first husband, I had to rescue my baby from and run. The second man in my life held me down and force-fed me some kind of drug, because him and his friends wanted to have a party and I was the center of attention. The police came and found me hiding with a butcher knife and then the state got involved and took my children for a year.

The husband that I have been married to in October for 35 years was getting sick and we didn’t know why so we came back to the Portland area in our motor home, and gave up on living on his dad’s property, trying to find help for him because the doctors there couldn’t figure out what was wrong with him. We ended up homeless because of it and he just got sicker and sicker than I thought he was going to die.

So I was dealing with being homeless and having the police chasing us out of places with their guns, and my son that was missing and sticking needles in his arm, and a husband who was slowly stopping to get out of bed that the doctors couldn’t find anything wrong with him and I fell apart. He called his sister after I fell asleep and told her to come get him and I didn’t know it and I woke up in the morning and he was outside getting in her car if I had not woken up when I did he would’ve just been gone and I would’ve never know what happened to him.

He left me there standing homeless and alone beside the road.

They found out not long afterwards that he is bipolar and that’s why the doctors couldn’t find anything, because he was going to the wrong kind of doctor. I still want my husband to come back to me I know that was not his fault. I am sure that he feels like a big giant nothing. His therapist told him the way that he was treating me was severe mental abuse and I am afraid for what that did to his heart and self-esteem.

When he left and I was standing there in the road I did not know what color I liked, what food I liked, I was empty. I did not know where to turn, for he made every decision and eventually I could not make one. He thought he was taking care of me he did not know it was abuse. However, there I was unable to make any decisions down to the kind of toilet paper I bought and faced with having to be homeless all by myself, I was terrified.

I was homeless for about a year or more when I ended up in my mother’s abandoned house and a few months after that because it was so cold down there she let me move into her basement. That’s where I am right now.

I am in the basement in the bedroom that I was in when I was molested as a child.

I am on SSI and I volunteer at the Sandy community action center. I had to get my driver’s license something of which I swore I would never do because of my seizures for fear of having a seizure while I was driving even though I almost never have them anymore and I forgot my medication twice in a row and had a seizure while I was driving. Now my car is a bit messed up and the volunteer job is very hard to get to. I am trying very hard to get off of SSI and give back to my community that have been supporting me.

My husband has been gone for two years and is still not talking to me. My son is in a group home after he had an episode and attacked me.  That finally got him the help that he needed and he is medicated for the first time in his life but he is at least an hour away. My daughter is in another state up in Washington. She is about an hour away and it feels like my whole family is just disappeared out from under me.

Without a vehicle I cannot go see any of them.

I have two sisters both of which have some form of PTSD to one extreme or the other. My little brother passed away several years ago in a similar situation as Michael Jackson with medication that he should not have been taking from the doctor. My dad is also gone and my mother is trying very hard to fix the house so that she can sell it and get something that’s hers, because my father also made all the decisions and now she wants her turn. That’s part of what my book is going to fund.

I have been being helped by a man on Facebook his name is JC Limitless. He has been helping me grow and giving me confidence to do this although I am still terrified I’m still going to do this because I believe that this book will help people draw out their pain.

Everything in the book is a poem and they start from little kid nursery room poems that have to do with abuse. It’s an emotionally difficult read. There are poems in there that deal with pain with feeling hopeless with wanting to be dead with the extreme anger, and they’re even a few healing poems in there.

I am changing my life and in doing so I hope that what I learned during this change in my life will help others and sharing my story and my poetry with hurting people it is my hope that it draws out the pain that they have in their heart from whatever their pain is from and they’re able to release it and have a better life.

Pain’s photos done by bowtiekreative and photography by KendaDavisPhotography. Visit my Facebook page here to purchase my book. The pre-order price is $25 and anyone who pays $25 will get a signed copy! I’m expecting my book to be out July 1st! My website is not finished yet people have been sending me money through PayPal to pre-order their books so that I can earn enough money to publish! My PayPal address is http://paypal.me/susanDaywriter. Thank you!

9 responses to “Pain Has No Boundaries by Susan Day”