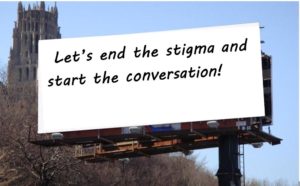 “Let’s end the stigma and start the conversation” has become as cliché as just say no to drugs, sex, etc. So many people with mental illness continue to feel stigmatized because the system is flawed by brushing off and degrading those in need, forcing them to live outside of society with limited help and hope. The good news is that people are more aware of the stigma and are now talking about the need to end it. But is it enough? I know first-hand it isn’t.

I had fallen off a ladder and broke my wrist back in June of 2016. The doctor cast the break but somehow didn’t remember that in the days to follow, I will be in pain. The pain was unbearable that I knew I had to go back to see the doctor. With the trauma and pain from the fall, I had forgotten to eat. As I walked through the doctor’s office hallway, it started swaying from one side to the other with every step I took. I knew at that point my blood sugar was too low and if I did not find food soon, I would be in big trouble. I wandered up and down the hallway waiting and waiting until finally, the receptionist came back with my prescription for pain. I could see my son out the window watching and waiting for me to come out so we could drive to the food bank and find some food.

I am thankful for no longer be homeless; but the abandoned home my son and I shared had no power. I was dressed in mismatched clothes because I couldn’t afford to go to the laundromat. I had on a green pair of pants that went down to my calf that had pink and blue flowers on them across the bottom a big yellow stripe that had pink flamingos on them. My shirt was short-sleeved with pink roses. My socks were bright blue with bright green, dark blue, and white squares all over them. My cast was dark purple that I wore it from a couple of inches below my elbow all the way to my fingers. My hair was dirty and messy and rolled up and put a hair claw in the back, it was flighty and wispy. I was very embarrassed to be in public looking like I did and I’m sure I smelled as bad as I looked. At the end of the day, I consider myself one of the lucky ones having overcome: being raped at twelve; bullied by my siblings causing PTSD; and abandoned and left homeless by my bipolar husband.

Unfortunately, my son is going through the revolving door of society’s abusive neglect. He is a tall thin man, almost forty, sporting a Mohawk. His pants are too big so he holds them up with one hand while shaking his fist at the invisible man with the other. He has schizophrenia, a debilitating illness that takes over the mind, causing all sorts of problems, seeing what is not real is only one of them. He’s often red-faced, in a huge fight with no one, yelling at nothing. He has been homeless more than he has had a home. He has been a drug addict for many years, trying to escape the torture of his affliction. He has been repeatedly   hospitalized, arrested and his belongings stolen by the police. He has no friends. My family is afraid of him. All he has in this world is me but unfortunately, it’s only so much I can do to help him by myself.

Appropriate mental healthcare is a growing concern for most communities nationwide. Despite the passage of the Helping Families in Mental Health Crisis Act, most states, continue to experience deep cuts in mental health services. Cuts in mental health funding has proven to foster unbalanced lives, prison, and death. Yet, increasingly more teenagers and adults are succumbing to various mental disorders. The United States of America must end the lip service of “ending the stigma and starting the conversation’ and re-establish funding necessary to helping those suffering from mental disorders to become healthy productive citizens who learn how to live independently. Happy New Year Everyone!!!

Susan spent most of her childhood trying to runway from her mother’s basement. At the age of twelve, she was raped, battered and emotionally scarred. She suffered through one abusive marriage resulting in a son and another destructive relationship which produce a daughter. Susan married for the second time they lived in a motor home until becoming homeless. After about two years of homelessness, he left her standing beside the road.

Susan met therapist. Dr. Carol, after several bad experiences with previous therapists. According to Susan, Dr. Carol helped her to gain balance so she could focus on lifelong goals. Susan wanted to be a writer since childhood and is currently working on several books. She helps feed about 1500 families each month.at the Community Action Center in Sandy Oregon. She also helps sort through the Center’s donated items for sale to raise money to help anyone in need. Because of volunteers like Susan, the center can help mentally ill and homeless people like her son to get food, clothing, and shelter.

Most recently, Susan is under contract to publish her first book!!!

3 responses to “Mental Illness in America: The Ugly Truth”