HOPE: Helping Others Persevere with Empathy 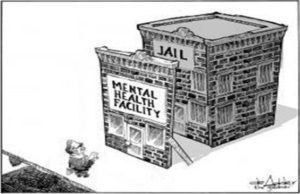 Scenario 1: “I’ve gotten all of your tests results back and consulted with the team of specialists and we have determined that you have stage three pancreatic cancer. Your treatment options are _________, _________, _________. We recommend _______ for best results. You and your family have a lot to digest so I’ll give you some time to work through this; but we need to start treatment sooner than later. I’ll come back in an hour to answer all of your questions, okay?”

Scenario 2: “I’ve gotten all of your tests results back and consulted with the team of specialists and we have determined that you have bipolar 2 disorder. Have a seat in the waiting area and the receptionist will have your prescriptions and your next appointment for you shortly. Any questions?”

Why do we view mental illness differently than other sicknesses? According to The Free Dictionary, an illness is defined as, “poor health resulting from disease of body or mind; sickness.” (Farlex, Inc, 2016) Mental health refers to the well-being of the mind or brain. Our brain controls our overall well-being, including mental, emotional, physical, spiritual, intellectual and every aspect of a human being. A mental breakdown or manic episode is a symptom of the illness/sickness that usually creates a ripple effect that compromises the functioning of the whole person, including not only our main control system, but overall wellness – resulting in un-wellness – which is an illness or sickness.

Now, let us think about mental illness as a sickness of the brain that may encompass sporadic episodes that could occur and/or reoccur and/or may lead to a short term or long term illness. How does this seem to be a separate and unsubstantiated illness? How can we not think of mental illness as a medical condition? How is this type of illness any different than other types?

When defining mental illness, The Medical Dictionary, an online open resource provided says to, see mental disorder. Disorder is, “a derangement or abnormality of function; a morbid physical or mental state.”  After this basic definition of a disorder, there is a list of multiple types/varieties of disorders, ranging from acute stress disorder to unipolar disorder. On this one specific online medical dictionary there are approximately one hundred different and separate disorders that effect a human beings mental or physical wellbeing. (Farlex, Inc, 2016) Therefore, it is safe to say that anyone may suffer from at least one mental disorder/mental illness. Bipolar disorder is on the aforementioned list; however, it is also referred to in the field of psychiatry and psychology as a serious mental illness or SMI.

The National Institute of Mental Health (NIMH) offers the following statistics on, Serious Mental Illness (SMI) Among U.S. Adults: While mental disorders are common in the United States, their burden of illness is particularly concentrated among those who experience disability due to serious mental illness (SMI). The data presented here are from the National Survey on Drug Use and Health  (NSDUH), which defines SMI as:

·   A mental, behavioral, or emotional disorder (excluding developmental and substance use disorders); 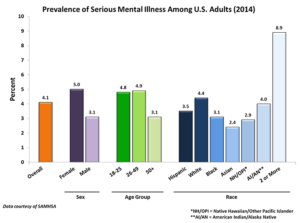 ·   Diagnosed currently or within the past year;

·   Of sufficient duration to meet diagnostic criteria specified within the 4th edition of the Diagnostic and        Statistical Manual of Mental Disorders (DSM-IV); and,

·  Resulting in serious functional impairment, which substantially interferes with or limits one or more major life activities.

Based on these findings, we may determine that SMI is found among a multitude of different cultures, races, and classes in the United States. It knows no boundaries and has no limits as to who experiences it. Also, there is much research in the field of psychiatry and psychology that suggest SMI may be inherited or triggered by trauma. Families all over America and in other countries continue to seek answers as to why their family members do not receive the treatment and care they need and become or cause another tragic statistic.

A recent article by Emily Reynolds from the Science of Us, points out that SMI is relatively rare as opposed to all the other mental disorders. She also suggests, that the major difference between mental disorders and serious mental illness is psychosis. Psychosis is largely misunderstood by those who either don’t believe it is real or cannot rationalize or imagine such a phenomenon. In this article, Emily defines psychosis as follows:

Psychosis, in broad terms, is a condition that causes hallucinations, delusions, or thought disorders. This can include auditory or visual hallucinations, delusions of grandeur or persecutory delusions, and sometimes catatonia, an extreme loss of motor skill. And if it is indeed talked about less than, say, depression, it could be at least partly because psychosis is so much less common. According to the National Alliance on Mental Illness, 100,000 young people experience a psychotic episode per year, compared to 16 million who will have an episode of major depression within that same time period. Overall prevalence of psychosis (which, it’s important to note, can also be a symptom of major depression) stands at roughly 3 percent of the U.S. population (or about 9 million people), with depression affecting around 22 million, or 7 percent, of the population. (Reynolds, 2016)

Also on the topic of psychosis, Emily states, “Research has suggested that individuals with psychosis are “viewed most negatively by the public” and experience the most discrimination compared to people with other psychiatric disorders, said David Kimhy, associate professor of clinical psychology at Columbia University Medical Center. In other words, people with psychosis make up the most highly stigmatized group within those with mental-health issues.” (Reynolds, 2016)

We cannot figure out why our mentally-ill loved ones are locked up in prisons instead of receiving appropriate medical treatment in reputable mental hospitals and clinics. We have more medical technology, we are more educated, and there are so many new treatments, yet the numbers keep rising and people are falling by the wayside. Once diagnosed, they are categorized and scrutinized by society to the point that the majority give up and become statistics of recidivism, homelessness or worse, suicide.

On a personal note… as a mother of an adult child first diagnosed with bipolar disorder with psychosis at the age of 18 – right after he enlisted in the U.S. Army – he has continuously been discriminated against because of his SMI. The U.S. Army gave him an honorable medical discharge as soon as he went through the initial physical; it is ironic that he was committed, at that time, to the same mental hospital that he is in now. For more insight to my plight, please read  my previously published story:

A Mother Says Her Son Is Trapped: No One Listens To Her Pleas

Today, my son, Dwayne, is very well adjusted to any situation, and understands that he must continue taking medication to stay on an even keel; to stay well. This means taking care of himself; sleeping, eating, exercises, and being mindful at all times. As he studies to be a future peer support specialist, he hopes to be there to help others when they become ill, sick, or delusional. After surviving this long in jails and institutions, as well as witnessing the mistreatment and discrimination of others inside these places. His goal is to build a capacity of hope for those struggling with mental disorders.

There are few who have been diagnosed with bipolar or other mental illnesses that have been able to rise above the darkness that comes along with the stigma, and the damaging labels imposed by society. We hope and pray that by working together as advocates, peer support specialist, and crisis intervention teams, that in the future, those who are or become ill will be treated with empathy and compassion, just like individuals suffering from cancer. God bless you all, and welcome your comments.

Reynolds, E. (2016, August 12). Mental Illness Is More Than Just Depression and Anxiety. Retrieved from Science of Us: http://nymag.com/scienceofus/2016/08/mental-illness-is-more-than-just-depression-and-anxiety.html

Diana Stinson currently holds a position at Southwest Virginia Community College (SWCC) as an Education Specialist/Career Coach for the Trade Adjustment Assistance Community College and Career Training (TAACCCT) Grant – Round 4 and the PluggedInVA program. Her duties include assisting participants in their pursuit of gainful employment in manufacturing, welding, and carpentry/residential construction.

Diana earned a Master of Science in Education from Old Dominion University in May 2000. Much of her studies were in the field of workforce development within the Occupational and Technical Studies for Community College Teachers curriculum. In 2001, she began coordinating the training and testing services for the SWCC Computer Learning Center. She took a position with Northrop Grumman, as an IT Support Specialist II from 2008 until 2010.

In addition, she received an Associates in Science in Computer Information Systems in May 1990 and a Bachelors in Computer Science from Bluefield State College in 1992.

7 responses to “HOPE: Helping Others Persevere with Empathy”