Too Much Suffering: The Perils of Bullying and Mental Illness 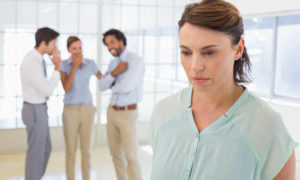 Does anyone else realize that bullying is not only a childhood issue? Or that many bullies continue being mean on into adulthood? Also, have you thought about the psychological health conditions caused by bullying? It continues to be a wide-spread issue across the United States, as well as around the Globe. All individuals need to become aware of their verbal and nonverbal communication with others. We must work together to prevent and alleviate as much bullying as possible. Too many have suffered too long…

Individuals who have been diagnosed with a mental illness experience the pain of being bullied on many fronts. First of all, their family members and friends… the ones who do not understand how to treat them, may be their worse bullies. They are told to, “Snap out of it” and/or “it is all in your head.” Many times family members have endured so much, they start hoping, mostly to themselves, that they would not even have to deal with the issues of their mentally ill loved one. One of the hardest things to accept is that someone in your family has a mental illness. Reaching out for help usually becomes a ridiculously useless effort. The broken mental health care system denies services unless someone is a danger to themselves or others. It is a shame to deny healthcare to those who need it most, however, it is the unspeakable and mostly denied truth.

In many cases, we find bullies among those who are supposed to be helping and assisting a mentally ill person. Most people do not realize that just the act of stigmatizing the mentally ill, is a form of bullying.  Uneducated police officers are sent to rescue and/or assist those who are experiencing a psychotic episode. We have read about many instances when the officers do not know how to provide help, and end up making matters worse. When they forcefully approach a psychotic person – the person in a psychotic state of mind, gets scared, panics, tries to run or protect themselves from whatever is coming next. It is a natural instinct to fight for freedom and then they get hurt or killed in the process. There have been many incidents of police brutality and/or fatalities due to lack of understanding how to handle the situation. Also, many mental health care workers and social workers have not been adequately trained and instead of providing compassion and empathy, they treat those diagnosed with indifference and intolerance.

Adult bullies mistreat others by being rude, mean, or cruel. They act as if they enjoy making others suffer, especially when they make fun of and/or ridicule them. This should not be tolerated… no matter how much power they think they possess over others. The No Bullying web site substantiates that, “Bullying is protected by law even though there has been a good amount of research conducted to find that bullying has dramatic consequences for its victims.” They also suggest that there are very real side effects of Adult Bullying, which cause the following: “Psychological health conditions that stem from bullying include: Stress; Depression; Mood swings; Loss of sleep and fatigue; Feelings of shame; Guilt; Embarrassment; and Low self-esteem” (No Bullying, 2014)

“Bullying targets often suffer serious health conditions due to their being bullied. Bullying also contributes to severely reduced workplace efficiency due to the intense strain placed upon the targets of this malicious behavior. The adult bullying can have an even more profound impact when it occurs in school settings. The students will quickly pick up the behavior and feel like it has been legitimized. Parents and school employees need to know how to confront and stop this behavior before it gets out of hand.” (No Bullying, 2014)

Workplace bullies, may be found in almost every line of work. Some may be bosses; others may be co-workers; some individuals may not even realize they are ‘the workplace bully or bullies”. Position or employment status does not matter, because no one has the right or privilege to devalue the feelings of others. Everyone deserves respect and should be treated with dignity, from the pauper to the king, and everyone in between. In his article, The Silent Epidemic: Workplace Bullying, Ray Williams makes the following observation to the very detrimental issue, “One thing is for sure; the problem of workplace bullying will not go away anytime soon and may never be fully remedied until enough people call for a return to a culture of civility, and demand that governments and organizations take action.” (Williams, 2011)

Cyber-bullying is another form of bullying that effects children, teens, and adults. Cyber bullies post cruel words on social media sites or send email messages with the intention of hurting others. The bully’s stand behind their freedom of speech, however, they cause much pain and suffering, because their words are very hurtful. Site admins should become aware of these issues and block bullies from posting on social media or anywhere else; some already do this. If you receive this type of post, the best thing to do is delete it – don’t even read it. Victims of this type of bullying often suffer silently, and some have even taken their own lives. For more information on this horrific issue, please visit the following web site: http://www.stopbullying.gov/cyberbullying/index.html  (U.S. Department of Health & Human Services, 2016)

Like any other issue… Ignoring that bullying exists… including all types and sources, will never eliminate or make it go away.

There are some cases when the Bully could be feeling that they are being wrongly accused. Hopefully, as we confront a person who has bullied us or others, we will remember that they have feelings too and think before we speak or accuse them. We could ask ourselves, are our comments or opinions hurting anyone? Every human being needs to be listened to and cared about. After all, we are all guilty, (excluding a few saint like human beings) of doing wrong or saying the wrong words on occasion, and should accept the responsibility of making amends. Calling a “truce” is another method that may work in some instances. Bottom line, if you or someone you know is being bullied… step up, speak up, and confront the BULLY.  Let the person(s) know that their words and/or actions are inappropriate. Make sure they understand that… if they think they are joking, it is not funny.

If we work together, we can put an end to childhood and adult bullying. After all, there are more non-bullies than there are bullies; more good people than bad. I am glad that I do not know many bullies, and the ones I do know are somewhere in my past. It would be wonderful if we all believed in the Golden Rule and acted upon it. May we continue sharing love instead of hate and always treat others as we want them to treat us. Our words and our actions resonate beyond us, so let us stop bullying and be good to each other, for the sake of our physical, emotional, spiritual, behavioral, and mental health.

Diana Stinson advocates for the fair and unbiased treatment for everyone, including those with a psychological condition/diagnosis. She believes those diagnosed with any form of mental illness should be treated respectfully and receive the same high quality health care afforded to others. She has worked diligently to help her son and speak up for those who have no voice and are feeling the sting of discrimination for reasons beyond their control.

A few months ago, the following story was published by Pete Earley on his Official Blog at the url listed below. It is a personal story about the unfair system and the cruelty, Diana, her family, and especially her son’s family have endured and are continuing to experience. Although, the psychological disorder of bipolar and/or manic depression is at the root of this issue, the broken community service, mental health, and criminal justice systems drastically increased the hardship.
http://www.peteearley.com/2016/02/16/a-mother-says-her-son-is-trapped-no-one-listens-to-her-pleas/

5 responses to “Too Much Suffering: The Perils of Bullying and Mental Illness”